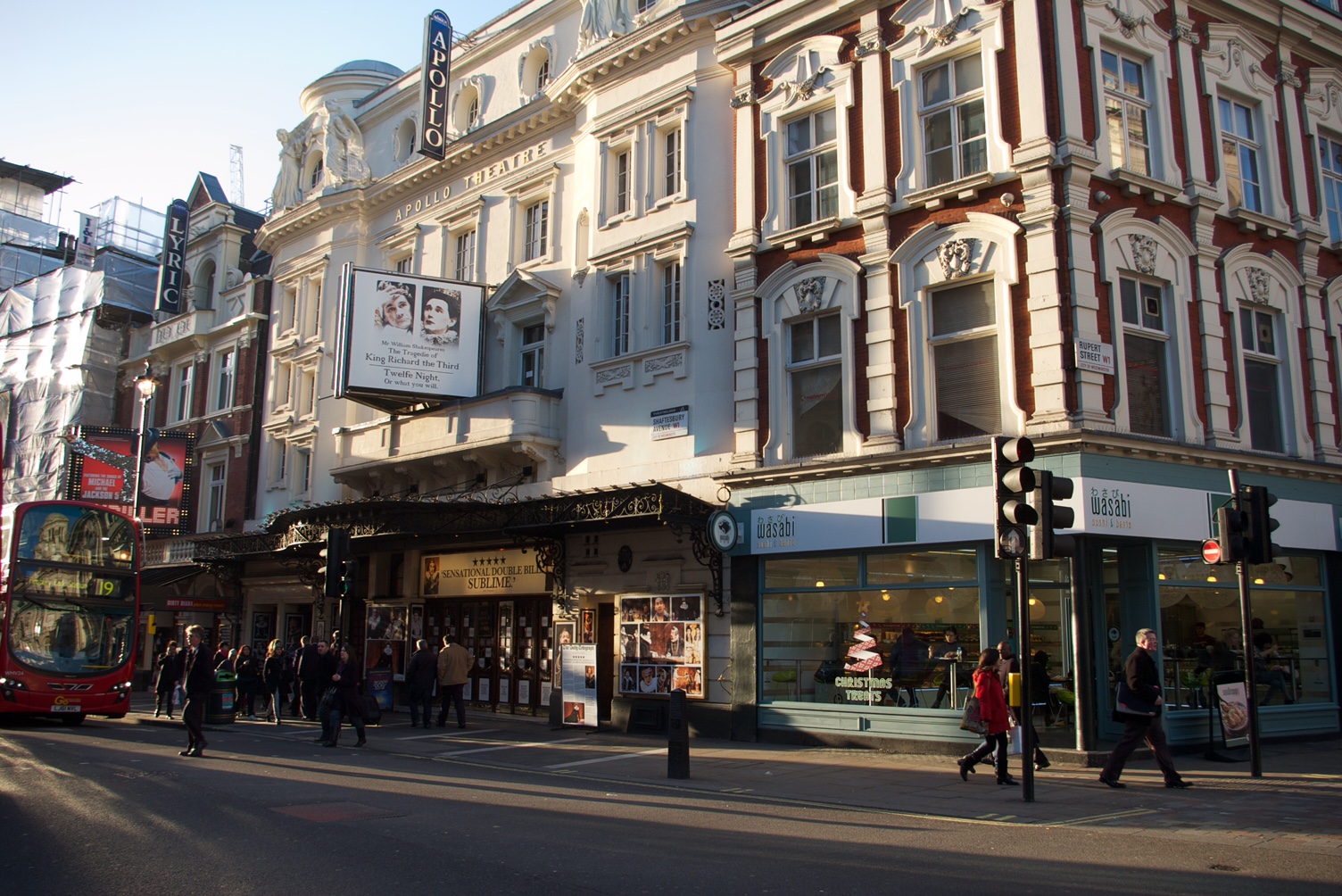 I was on Shaftesbury Avenue in London’s West End last Thursday night when the ceiling collapsed at The Appollo Theatre (pictured).  A Transport For London Supervisor told me that over 60 people had been injured (total casualties later rose to 80), I was waiting at a bus stop and he advised me that routes were diverted.  Like many, I was shocked that so many people were hurt and I wish all of those affected a speedy recovery.  One of the factors in press reports was that many were uncertain whether the noise and creaking of the ceiling were part of the performance.  This is indeed an interesting health and safety challenge as the distinction between reality and fiction and knowing when you are genuinely in danger is compromised when the audience is experiencing a performance.  I was also struck by Andrew Lloyd Webber’s comments that the Apollo and other theatres were in a dreadful condition and that English Heritage constraints on listed buildings were too onerous.  My advice would be don’t buy a listed property unless you love it and are prepared to pay over the odds to maintain it.  You shouldn’t sweat a historic central London venue for as much profit as possible and then complain about the cost of repairs.  Having said all that it was a pretty freak accident, wasn’t it?

I had a nearly collapsed ceiling this week in one of my houses and although the scale is considerably more micro than the Appollo it has made me think long and hard about the challenges and frustrations of maintenance.  My tenant called me at 11.45pm to report that water was pouring in through the kitchen ceiling.  The stop cock requires a key and is at the front of the house on the pavement.  I talked her through turning the water off and they left it off until I returned the next afternoon with a plumber.  The bathroom is above the kitchen, the plumber  took away the bath panel and I turned the mains back on expecting to see water gushing from a broken pipe.  But nothing.  We suggested the tenants started to use the bath and shower again and call the plumber if the mysterious leak re-appeared.  It did and thinking it was probably the seal that needed re-doing, the plumber sent a retired colleague to redo it.  But the patient (and very lovely) tenants  reported that the leak had returned, so I went back myself to see what was happening.  On closer inspection, the shower head had been knocked and was pointing inwards towards the back of the bath.  The shower head bracket was also loose so the shower head was drooping.  All of this was forcing water to the back of the bath and down the side of the shower screen under the bath and onto the kitchen ceiling.  Whoever had redone the sealant on the bath hadn’t bothered to cut out the existing silicone which was going mouldy.  Instead they had put an extra transparent layer on top.  It was a terrible job.

A couple of years ago, I decided it was time I stopped doing maintenance and that it was more cost effective to pay people to do work for me.  In this instance, simply replacing the shower head and tightening the shower head bracket myself solved the problem.  I had a similar incident in this property a few weeks ago where I used a property maintenance company to send someone to change an oven.  Their operative said the new oven wouldn’t fit and I should return it.  After more research I discovered that all ovens were the same size and that the electrician that the company had sent  had no carpentry skills and couldn’t adjust the cupboard where the oven fitted.  I’m sure these stories are very familiar to you, so just why is property maintenance so frustrating?  My builder is now going to replace the damaged section of the kitchen ceiling and will redo the silicone sealant and a few other jobs for me.  I know I can trust him, but can take a long time to do small jobs for me as he’s more interested in big refurbs.  Is this familiar to you too?

It’s clear to me that building work and maintenance are two separate things.  People who do big building jobs are not interested in minor maintenance.  The issue for them is that maintenance involves going to the property, working out what is wrong, going to buy materials, doing the job, waiting for plaster or filler or paint to try, going back and finishing the job. The cost of petrol and the travel time just isn’t covered by the fee.  Unless they just do maintenance and then they’re moving around all day, but they need to do at least 5 jobs a day to make a decent profit.  Maintenance also requires a lot of admin, liaison with tenants, picking up keys, taking lots of phone calls and only a small minority of building personnel are comfortable with admin, in my experience.  Of course half of the solution is sending the right trade to do the job and this, it seems, is where property maintenance companies fail.  I think many landlords are also concerned that these companies are just focussed on the task of the day and because you have no ongoing relationship with them, they don’t always take as much care as they could.  This is the most common complaint I hear about the maintenance operations of letting agents.

So is the multi-talented handyman the solution?  Well my experience is that they have a little bit of knowledge about lots of things and my builder is always telling me that the handyman hasn’t done things properly.  I don’t know if you’ve noticed but tradespeople often demean the work of others, saying that they could have done it better, this again leaves me perplexed.

Other  issues are price and availability.  Once tradesmen are good and get a reputation, they get very busy, so I’m often left telling the tenant that nobody can attend for several days.  And then good people put their prices up and add 20% because their turnover has forced them to become VAT registered.   I must admit there are times when I have paid more than I’m comfortable with for a tradesman who answers his phone, turns up when he says he will, gets the required parts and does the job properly.  Of course just when you think you’ve gathered the right personnel, someone disappears and you have to begin your research again.  Plumbers seem to be especially prone to this.  A builder I stopped using because his carpentry was terrible once told me “a tradesman is only as good as their last job” and this is so very true.  Having grown up in Nottinghamshire, I struggle with the horribly English problem of not being able to tell a tradesman he has done a terrible job.

My Greek builder has no problem challenging poor work.  Indeed he has suggested we put all of our experience to good use and set up a property maintenance company.  This would be a great way of ensuring my problems get sorted promptly, but I’m just not sure if I want to manage everybody else’s maintenance problems as well.  Even if we got a manager to manage it, I think there would be quite a high likelihood of customer frustration and the buck would of course stop with me.

When the Appollo’ s ceiling caved in last week, having starred up at the ceiling in one of my kitchens earlier in the week, it was so obvious to me that it was water ingress and just like in my case an unpredictable, maybe initially inexplicable incident.  For the Appollo, probably impossible to prevent and very expensive to resolve.  I suspect the maintenance team may see an opportunity to hike up the price with such a high profile repair.  Just how do you manage maintenance quickly and effectively, or do I just need to adjust my expectations?