What’s in a brick? 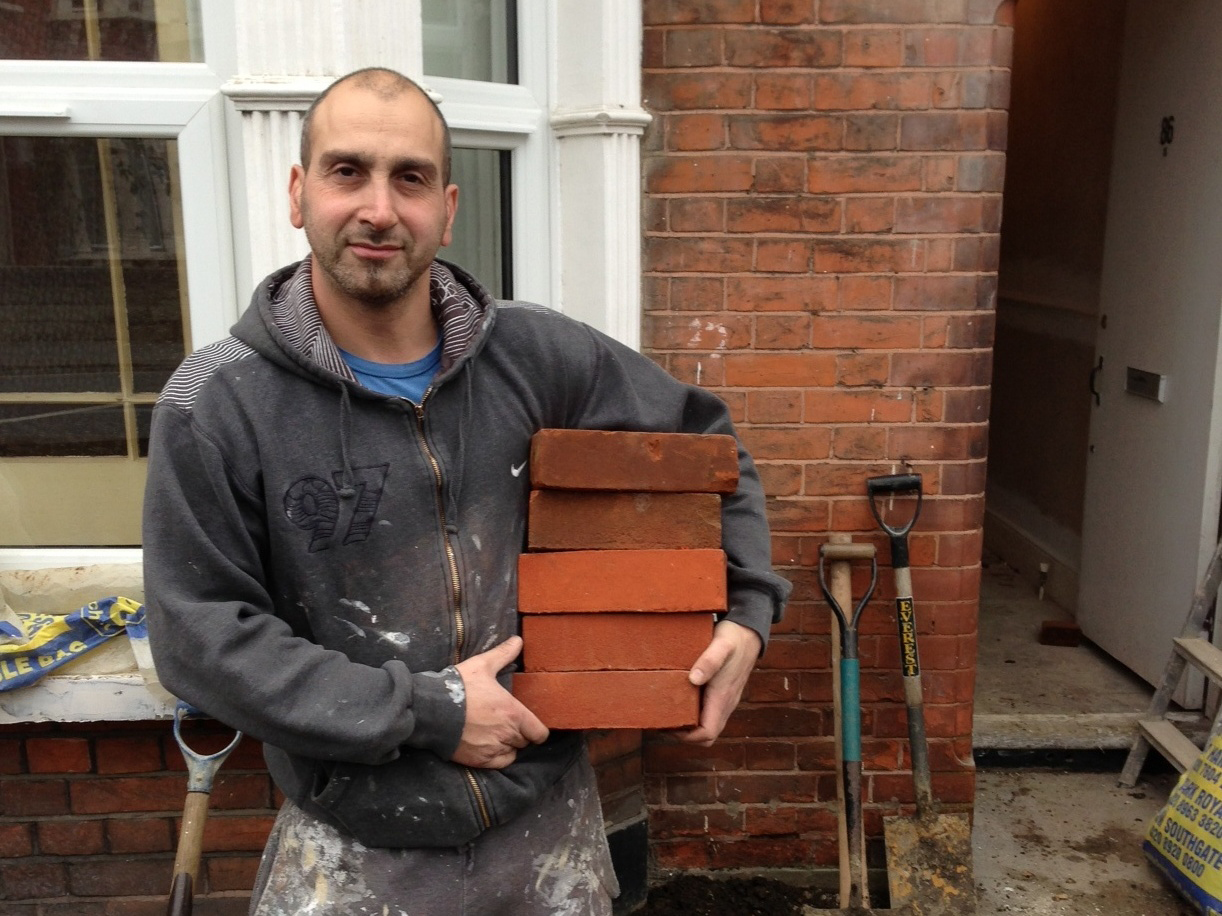 Introducing Stelios the builder, the star of my current refurbishment, with a selection of sample bricks for a wall we’re rebuilding.  He’s a great guy and project manages all the trades and labourers with real skill and panache.  I learn from him every day – having a good builder gives me confidence to push the business forward.  We have such a laugh too – it’s so important that you have fun on the way isn’t it?

We’re refurbishing a Victorian terrace in East London.  For Stelios it’s a brief with a difference, because he knows the emphasis is on sympathetic restoration.  Some of it is outside of his comfort zone.  He doesn’t like stripped floorboards and I don’t think he’s very interested in fireplaces (there were three originals and I got the fourth on ebay for a bargain £153!)  But he’s a professional and adapts to his client’s needs.

This is the first property I’ve bought with pebble dashing, just at the back thankfully.   I decided to render over it and paint it in white – a decision I’m very pleased with because it looks really fresh and contemporary now.   We’re changing the kitchen and bathroom, have replastered the whole house, changed the boiler and radiators and updated most of the electrics.  I have fitted uPVC windows and for the first time two uPVC back doors.  The area is fairly cheap and cheerful and just doesn’t merit timber sash.  A shame, but the financial reality is they are double the price and the maths of fitting them on this kind of project doesn’t make sense.  The new windows look smart and clean and I know tenants will be happy with them: I console myself.

So what’s with the bricks?  Well I’ve spent a couple of weeks getting samples and trying to match the red brick of the facade.  Stelios is holding five of them – which do you think I should go with?  They are Red Rubbers, Baggeridge, Leicester Red Stock, Swanage Berry Red and Warnham Red.  Startlingly they range in price from 60p to £1.22 a brick.   I needed 250 of them and the difference in price can stretch the budget.  The wall I inherited was made of concrete blocks and looked rubbish.  I think the garden wall really sets the house off well, giving it that all important kerb appeal.  It’s not everyday you replace a front wall and I decide to go with the middle brick which is swanage berry red at £1.22 per brick.  It is an imperial size, like the house itself and has a similar matt finish, not too textured.  The supplier tells me it will weather quite quickly like the front facade which is good because it looks a little too orange at the moment.  He sells a weathering paint, but I’d rather leave it to nature. 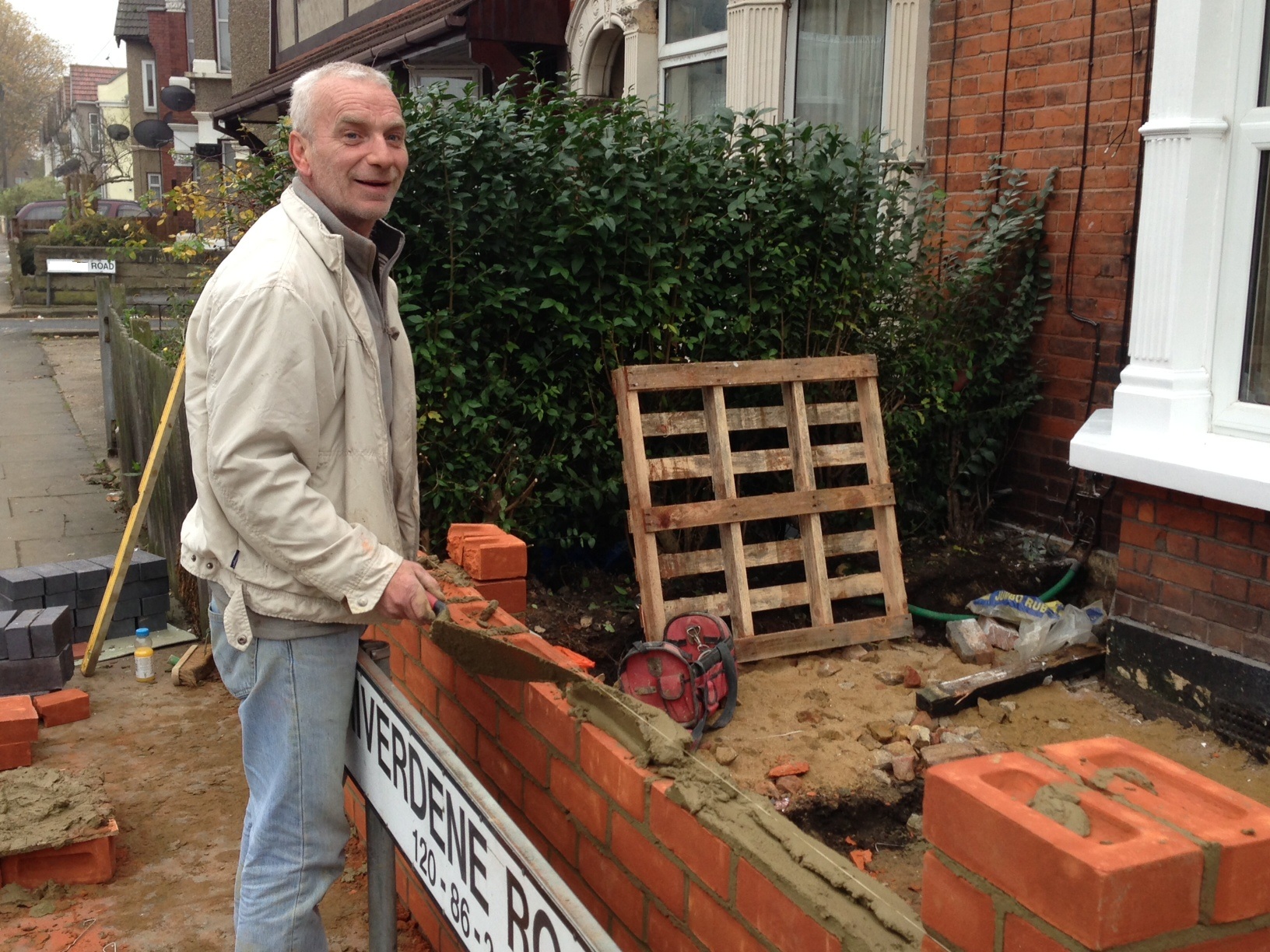 Tony our brickie, enjoyed building it.  He was surprised I was going to so much trouble for a property that I was renting.  I told him a smart property attracts good tenants who will pay a little bit more rent, stay longer and look after the property.  I could be making more money by scrimping, but I want to feel proud of my business.  Also scrimping leads to more repairs, so it’s not cost effective in the long run.  Turns out Tony has a fine art degree and does his own paintings and sculpture.  So my wall could be worth thousands if he makes it big as an artist!

There’s something very primitive about a brick, we muse.  It’s the building block of our homes and settlements.  It connects us with centuries of ancestors,  is made from earth and it reminds me of my playing with lego when I was a kid!  It was very satisfying  to watch a skilled craftsman build the wall.

We’re two to three weeks from turning an empty neglected house into a great new home for somebody.  There are one or two scruffy properties on the street so it feels really worthwhile  to be investing in a neglected area.  I’ve got to know a few of the neighbours and enjoy the connection with local people.  A guy who lives two doors away volunteers that we’re doing “a really great job” and lots of passers by stand and admire our new wall.